Since I first set foot in America I have been gripped by the need to visit all of the United States. I want to be able to say that I have had at least one foot in each of the 50 states but I haven’t the faintest clue why I want to do this. I know for a fact that there are several places on the list that I have no real interest in and I haven’t met so much as one American who feels the need to visit every corner of his own country so why do I? One thing is perfectly clear, though. If I am going to achieve my ambition I need to get on with it sharpish because I am running out of time.

It is 31 one years since my first trip to the US and progress in achieving my goal has been somewhat slow. This has been mainly due to the fact that I have discovered several places which I absolutely love and so have felt the need to visit them several times. As I have yet to master the art of being in two places at once this has rather hampered my efforts to explore new horizons. Las Vegas has proved to be a real stumbling block in this regard. My last holiday in Vegas was my seventh visit and I have made 6 trips to Florida and three to California.

Repeat visits have not totally scuppered my progress as I have often had to change planes en route meaning that I have had not one but both feet in Missouri, Minnesota, Texas, Washington, Georgia and Illinois without having to take a holiday in those states. Business travels took care of New York and Touring holidays in RV’s have afforded the opportunity to visit several states in just a few trips. In this way I made it to Arizona, Utah, Montana and Wyoming. The need for some golf took me to South Carolina in the 1990’s and last year a holiday in Ohio to visit Cedar Point involved flying into Detroit which conveniently is in Michigan. I also combined one of the Florida forays with a stay in Louisianna and so that is 16 states accounted for. 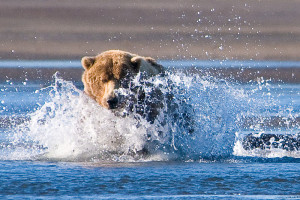 The most difficult issues were always going to be Alaska and Hawaii. These are very expensive destinations to visit, unlikely places to be changing planes and not places you would just happen to be passing en route to somewhere else. Alaska was one of the places I most wanted to see and so I spent three weeks there in 2005 and despite the epic cost I don’t regret a minute of what was an amazing trip. Hawaii remains elusive however.

I have made it to 17 states but that still leaves 33 to visit. As it has taken me 31 years to complete the first 17 I am going to have to get my skates on. There is something very exciting about the pursuit of my aim and that is probably the key to my ambition. I think people are hard wired to collect things and to complete sets. I am not an expert in psychology and so I don’t understand why but most people collect something and with me it is destinations. I suppose it is more life enhancing than collecting dolls or ornaments. I even know someone who is obsessed with power tools! He probably thinks he needs 10 hand drills as much as I need to visit 50 states.

I am off to Cornwall next week for a short break. I’d rather be going to Alabama or Arkansas if only to add to my collection but at least I am going somewhere. You won’t, however, find me rummaging around a Cornish tool shop whilst I am there but I might take a sneaky trip to the local bookshop for some American travel guides. It is time to formulate a plan!