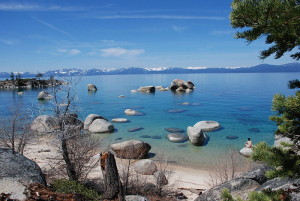 Despite several visits to California Lake Tahoe was a destination I had managed to miss over the years and I thought it was time to put that right. I was planning another touring holiday starting in San Francisco which was to feature mainly places that I had been before so it was nice to ring the changes a bit by including somewhere new. I didn’t really know what to expect of the region and was slightly wary because it was not a national park and so I has concerns over urban development but I shouldn’t have worried.

Driving from San Francisco my first view of Lake Tahoe was spectacular. I weaved my way down a mountain pass and then suddenly there was a huge blue vista before me surrounded by snowy peaks. It was obvious that due to the wooded shore line and lower slopes most of the buildings which surrounded the lake were all but invisible from a distance. The only exceptions were the large casino hotels of South Lake Tahoe but that was fine.

The lake straddles the California/Nevada state line and the Nevada portion of South Lake Tahoe is a mini Las Vegas with several casino hotels and a touristy feel but just a couple of miles beyond the town you feel like you are in another world. I stayed in the RV park at Camp Richardson which was beautifully appointed in the forest and just a short walk from the water.

Sunset at the Lake

As the light began to fade on the first evening I took a stroll down to the water’s edge. Tahoe is gorgeous at sunset with the shimmering lake fading into darkness and brightly lit paddle steamers crossing the water. I decided that I couldn’t resist a quick dip and was surprised to find that the mountain lake was mild and perfect for swimming. The shoreline is sandy making for a wonderful place to relax during the day.

I has no time to relax myself, however, as I had planned several activities and excursions and my first full day started with a ride on horseback through the trees of the lower slopes. It was wonderfully peaceful trekking through the forest despite being relatively close to the road and Tahoe was really impressing me. 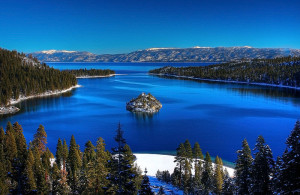 After the riding I took a drive up to the Emerald Bay. This is a spur of Lake Tahoe famed for its stunning emerald colour and surrounded by steep cliffs. It was so pretty and above the water there was a stunning waterfall to explore. This was a beautiful spot of great serenity with stunning views as far as the eye could see.

The next day I set off for a drive around the circumference of the lake. En Route I just had to stop off at the Ponderosa Ranch of Bonanza fame. The house used in the television series is now a major tourist attraction and almost a mini theme park. In addition to a tour of the house there were recreations of Wild West shoot outs and animal exhibits to enjoy. It was a bit commercialised but I actually loved it! I was saddened to hear that the ranch has since closed.

It was then time to move on and I continued around the lake through Incline Village which is largely a development of holiday accommodation. Along the road I saw what looked like an interesting shop and stopped for a quick look. The quick look soon turned into a major shopping expedition as this wonderful outlet was packed with beautiful homewares and gifts. I left weighed down by several purchases and spent the rest of the drive wondering how I was going to get it all home!

The following day I went quad biking which turned out to be one of the best days I have spent anywhere on the planet. The original plan had been to take on the famous Rubicon Trail but a late snow melt meant the trail was not available and so I was diverted to the Nevada desert on the other side of the mountains. This turned out to be a good thing as the territory was a wonderful place to ride. Flying over the hills of red sandy desert I had snow-capped mountains as a backdrop and a crystal clear blue sky above. My guide was simply brilliant and we climaxed the trip with a race across the dessert flats.

My final day at Tahoe was marked by a trip up the cable car to the appropriately named Heavenly. There are some stunning views of the lake from the first station and the summit is a very pleasant place for a hike. I was sorry that I had not had more time in the area to do some walking but I felt that I had seen a lot in my four days and Tahoe was certainly somewhere to return to in the future.

With a heavy heart and laden down with quality gifts from that wonderful shop I drove away from Lake Tahoe the next morning and headed for my next adventure in Yosemite National Park.