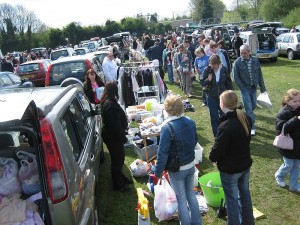 I used to do the odd boot sale to generate some cash from my unwanted goods but had largely given up on the idea since the arrival of eBay. The online auction site offered an opportunity to achieve better prices for items of genuine value and then there was the fact that you didn’t have to get up at some ungodly time of the morning to do your listings. Boot sales were looking considerably less attractive propositions in comparison to eBay but I have recently had cause to visit one again and it was well worth the effort.

The truth is that some things are just not appropriate for selling on eBay. Anything which is large or heavy but of little value rarely works because of the postage and it just isn’t worth the time to list things that will fetch a pound at most when you then have to wrap them up etc. Like most people I had accumulated a small mountain of assorted household items and toys in the loft and the bit of me that hates waste didn’t want to throw them away.

As a result I found myself in a Surrey field at 7am one Sunday, unloading my car and being assaulted by buyers asking for various goods that I mostly didn’t have. As soon as you open your boot you are jumped on by the early birds looking for specifics, usually mobile phones, music on vinyl and sports equipment. After the early rush it was a case of spending a pleasant morning in the sunshine making the occasional sale and having a chat. I walked away £85 to the good as well, not bad for a morning’s work.

The most interesting aspect of the day was taking a walk around the stalls. Most were exactly what I expected – displays of assorted tat that went out with the arc. However, every so often there were things of interest that surprised me and it soon became apparent that boot sales were good places to find the odd bargain. I was also astonished at the volume of bizarre and left field stalls dotted about. One table was covered in American Indian headdresses (is there a market for those?) and another with shell casings that must have been spat out of some very large guns. Another was piled up with a variety of sewing machines which had clearly escaped the attention of All Saints! My best find was a DVD that I really wanted.

People’s behaviour was quite fascinating too. It appeared that anything over 50p was too much to ask for anything no matter its value and I truly marvelled at the succession of potential buyers who walked away from my antique footstool when I told them I wanted £10 for it. The thing is worth at least £100!

All in all, the boot sale proved to be an unexpectedly good day out. I made some money, got rid of several things that had been cluttering up my loft, found the movie I had been looking for and had a few laughs. It was a great place to people watch and an interesting study in human behaviour. If you have some things that you would like to sell then it is a good place to go but only take goods that you are prepared to let go for a pittance. I never did sell that footstool and it is now on eBay!