Growing up I was a great fan of Yogi Bear and knew that his fictional home Jellystone Park was based on Yellowstone. Years later and with a firmly established love of both bears and the great American outdoors it was inevitable that I should eventually pay a visit to the United States’ inaugural National Park and I set out with great expectations and the hope that I would see at least one of Yogi’s cousins.

I entered Yellowstone from the West having driven down from Montana. As I entered the park the landscape was initially unspectacular but very soon my excitement mounted as a herd of grazing buffalo came into view. Significant wildlife in the national parks can be difficult to find and so it seemed rather amazing to discover such a spectacle on the side of the road. Further into the park an ethereal scene unfolded as I entered wide grassy plains with numerous buffalo in view and steam rising from the ground everywhere. It was the first sign that I was in the caldera of a super volcano and nature was still at work right under my feet. I headed to my camp site at Fishing Bridge and passed the glorious Yellowstone Lake, a huge expanse of water in the centre of the park with snow-capped mountains rising up all around. 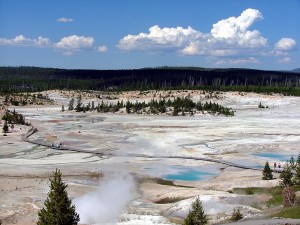 The most famous features of Yellowstone are surely the geysers with the superstar being Old Faithfull, named for its predictable eruptions. On my first full day in the park I began by paying a visit to this celebrated geyser and it did not disappoint. At the predicted hour a huge fountain of hot water was projected high into the air, it was a powerful and moving sight. I then took a stroll around the other nearby geysers some of which have minor eruptions intermittently and others which constantly bubble and spit as you pass by. These powerful acts of nature at work were so mesmerising that it was hard to pull myself away but eventually I left the board walks around Old Faithful to visit the other geyser basins and thermal features. The absolute highlight was the Grand Prismatic Spring at the Midway Basin an extraordinary pool of vivid blue surrounding by striking colours formed by the minerals in the water. I also viewed a dormant Steamboat at the Norris Geyser Basin. This is the largest geyser in the park but erupts at intervals of up to 50 years propelling water over 300ft into the air. 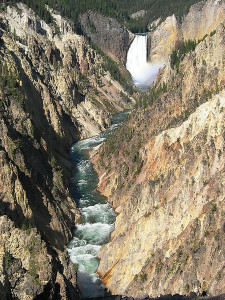 Having visited the Grand Canyon I was anxious to see how the Grand Canyon of the Yellowstone measured up. The day did not start well as it was snowing heavily despite being June and the blizzard looked set to ruin my chances of seeing the canyon. I retreated to a snack bar for a hot chocolate and was astonished to emerge from my break into bright sunshine and clear skies. The canyon was a dramatic site with its steep yellow/orange walls and enormous waterfalls. There were several great viewpoints along the rim and the highly enjoyable sight of marmots on the ground. Eagles soared above the canyon as I stopped several times to take in the magnificent vista and I ended my visit at the appropriately named Artist Point from where you can admire the canyon stretching before you with the cascading falls in the distance.

My Third day was spent driving around the park in the hope of seeing some of the incredible wildlife that inhabits the region. I had not been on the road for very long when I came upon a tell-tale line of cars by the side of the road. This is a phenomenon known as a bear jam but on this occasion the cause of the excitement was a moose which was standing in bushes not far from the road. I stood and admired the moose for some time before and American gentlemen informed me that he had seen a grizzly bear just half a mile up the road. I hastily moved on and found the bear relaxing in a nearby meadow. What a joy! I stayed for over an hour watching this majestic creature going about his business. That day I also saw a pack of coyotes, a porcupine, more buffalo and several deer.

I rounded off my trip by taking a hike through the back country following a crystal blue river. The landscape was truly gorgeous and I always had the sense that I would stumble across something special around every corner. The river made me wish I had fishing tackle to catch my lunch as I had seen many anglers along the waterways in the park. I had to settle for retrieving a huge buffalo tooth which I could see in the water. I have kept that tooth to this day as a reminder of my glorious trip. When in Yellowstone you know that great powers are at work and that you are in a super volcano which may one day erupt and change the planet forever but at the same time you are in a world of such beauty and natural wonders that it doesn’t feel like you are on earth at all but on another planet entirely.