Travelling can yield many delights and the most fabulous memories but sadly things don’t always go to plan and you can end up taking a trip that you would rather forget. It always pays to research your destination well in the hope that you can avoid most of the potential pitfalls. If you set off in blissful ignorance or do not heed the warnings then you could easily run into trouble no matter how seasoned a traveller you are.

I have a friend who is certainly the most travelled individual I have ever encountered. He has visited virtually every country in the world and in the course of his adventures has taken on bandits in Africa, braved the streets if Bogota and hitch hiked across Argentina. Despite this he still managed to make a schoolboy error which ruined a special trip.

He had an unfortunate habit of leaving his wallet in the back pocket of his trousers and jeans. I had cautioned him about this on several occasions to no avail and I was becoming worried because he was about to travel to Barcelona, a city rife with pickpockets. I resolved to teach him a valuable lesson before he set off and so one afternoon after a round of golf I decided to steal his wallet. As he leaned over the bar in the clubhouse to order a drink and some food I took his wallet and retreated to a vacant table. I sat and waited for the moment when he was asked to pay and sure enough he went for his wallet only to find that it was gone.

I was slightly astounded that his primary concern at that moment was the wallet rather than its contents. This turned out to be because the wallet in question had been a souvenir of trip to Scotland. I put my friend out of his misery by handing him back the wallet and pointed out that if I could pinch it in a quiet bar then it was going to be a cinch for a dipper in Barcelona. He promised to act with more care whilst abroad and I thought I had made my point well. 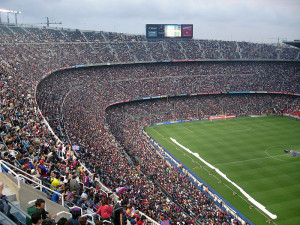 Not well enough as it turned out. Off my friend went to Barcelona to see his football team play in the legendary Nou Camp stadium. On his return I arranged to meet up with him and was eager to hear about the trip. I was shocked to hear that although the match had been amazing and the city spectacular, the whole enterprise had been ruined when his wallet was stolen from his back pocket in Las Ramblas.

How can a man who has survived a bandit attack in the Congo and sundry other perilous situations be so foolish? Spain must have seemed such a benign prospect after darkest Africa and Colombia but you should never drop your guard. If a destination has a reputation for anything then there is more than likely a reason for that and you don’t have to travel far to find yourself in trouble.