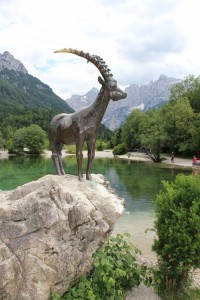 Last year a hike in the Julian Alps of Slovenia resulted in the most bizarre interlude at a small croft in the mountains. I had taken a lengthy and steep hike up to a beautiful lake and was making my way down again when I encountered the most extraordinary individual. The whole episode began when I saw a gorgeous ginger cat perched on a post outside of the small farm.

I just couldn’t resist going to meet the cat and wandered up towards the building. Meanwhile my partner was wondering why the herd of goats which clearly belonged to the farm had all simultaneously decided to leave the hillsides and return to their home. There were goats everywhere which didn’t seem to trouble the cat or the other animals in the yard which included a rather impressive pig. I was just considering approaching said pig when a bizarre looking gentlemen who appeared to have escaped from the Beverley Hillbillies came out of the farm and stated to talk to me in heavily accented Slovene.

I couldn’t understand a word he was saying and he didn’t speak English. My partner, still anxious to solve the mystery of the goat migration, attempted to quiz the farmer via sign language. He clearly understood that we were inquiring after the goat’s return and proffered an explanation which sounded like botox lolly. We couldn’t see how either botox or a lolly could have anything to do with goats and the poor man had to repeat himself several times before we realised that what he was saying was border collie! Evidently an over enthusiastic dog, probably the one we had seen charging into the lake after a meal of Canagan dog food, had barked and spooked the goats.

Frankly the whole situation was beginning to spook me! We were then introduced to the pig and the chickens before being invited into the farm. Happily the interior turned out to be a cheese making facility hence the goats. We were treated to an in depth explanation of how to make cheese  which was incredibly enlightening considering the farmer’s only English vocabulary was Border Collie and Pig! My Slovene extended to dobre dan (hello) and prosim (please).  A conversation with the pig would have been in many ways more straightforward. 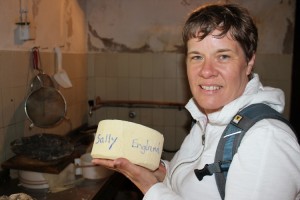 My visit was rewarded with the opportunity to record my name on a cheese which we managed to deduce from the production of a calendar would be fully matured a year later.  I would never get to eat my personalised cheese but I did buy a wedge of another one which turned out to be utterly delicious.

Eventually we had to leave the farm to complete our hike down the mountain.  I will never forget that eccentric farmer in his dungarees surrounded by goats and chickens and living alone in splendid isolation.  I won’t forget the cheese in a hurry either and in the future some other unsuspecting tourist will wander into the farm to see a cheese with my name on it.