Sometimes things don’t go entirely according to plan when you are hiking in the mountains. I have learnt to my cost that it pays to be prepared for all eventualities and one thing you should always do is check the weather forecast which is exactly what I didn’t do when a hike turned into a nightmare. What started as a pleasant walk in the sunshine to one of my favourite beauty spots quickly descended into a highly unpleasant experience. 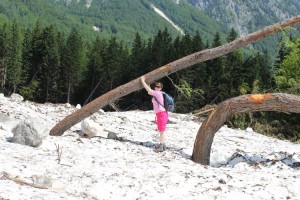 My partner and I had started out early on a fine morning in the Julian Alps of Slovenia. On a previous visit we had very much enjoyed a fairly arduous but spectacular hike up to Luknja high above the small town of Mojstrana. We anticipated another successful day and set out on the trail again in good heart but the trouble started shortly after we left the car park. After a short walk in the forest we arrived at what had been a pleasant meadow to discover that a major avalanche had left the area covered in a deep layer of snow which had yet to melt. We traversed the snowfall without too many problems but further up the trail it became clear that there was a considerable amount of snow at the higher elevations. Stupidly neither of us considered that this might make the steep ascent up to Luknja a problem but we were about to find out that it was quite a big issue. 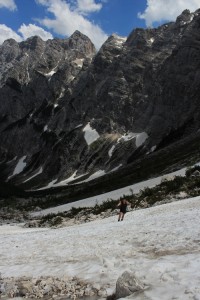 The hike is quite an undertaking on a good day but with large areas of snow and ice to traverse on very steep slopes it felt like taking on Everest. It took twice as long as usual to travel the upper portion of the trail and I was already feeling quite exhausted when I arrived at the foot of the final ascent which is normally a steep area of loose scree. This type of terrain is always very hard to tackle but not as difficult as a bank of ice which is what we found. It took an age to pick our way up by hacking footholds in the ice and I was already concerned about how I was going to get back down.

On arriving at our destination we sat down to enjoy a picnic lunch but after only ten minutes or so the sky started to get very dark and there were faint rumblings in the distance. It dawned on me that a rather nasty storm was approaching and that perching on a small saddle in such an exposed place was probably a very bad idea. We hastily started to beat our retreat and were about half way down the perilous sheet of ice near the summit when the heavens opened and a deluge dropped out of the sky.

As soon as we were free of the ice we dashed for cover underneath overhangs in the mountainside but after a couple of minutes it was rocks and stones that were raining on me as well as water. My partner had found a safer hiding place but I was forced to break cover and run for it. By this time the rain was accompanied by lightning bolts which seemed horribly close and I wandered weather I my premature death would be by being struck by rocks, lightning or simply crashing down one of the snow covered slopes.

To add insult to injury the rain then turned to hail and I was being pelted all over by lumps of ice as I picked my way down the hill. I was covered in bruises and soaked to the skin but there was nowhere to shelter in sight. I would have given anything for somewhere to rest and something comfortable to sit on. I had been perched on rocky scree before having to make a run for it and found myself dreaming of fluffy rugs and cosy sofas!

Eventually the storm passed to be replaced by bright sunshine and my partner caught up with me on the trail. I had largely dried out by the time we got back to the car but I felt freezing cold and rather shocked. Next time I set foot in the mountains I will check the forecast because I really don’t want to go through all that again.