May 2015 saw the opening of a new attraction in London that will appeal to art lovers and ramblers alike. The Line is a series of three connected walks in East London beginning in North Greenwich. Sculptures have been placed along the route, many by household-name artists. The Line sounds like a decent idea but there are some issues with the walk not the least of which is signage!

If you felt like exploring the route your first port of call would probably be the website. After all we are in 2015. The website would perhaps explain the route you should take and the works of art that you might encounter on your travels. It might very well do exactly that if you can get it to load properly which is something I have failed to do. An irritating landing page which seems to take an eternity to cycle through its pointless graphics is followed by an epic fail! Apparently you don’t even get that far if you try to use your mobile which you would if you were in East London trying to find the starting point for the trail! 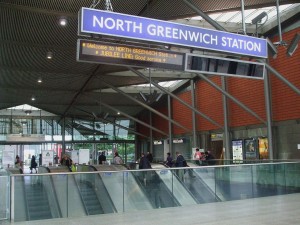 If you have managed to ascertain that you should head for the O2 on the peninsula to start your adventure then things just get more confusing. The signage for the route is rubbish but if you wander around the dome and ignore a “no unauthorised persons” sign from Balfour Beatty and then progress clockwise you will stumble across the Thames Path and then the first work of art which is a road sign by Thomson and Graighead. This indicates the distance that you would have to travel around the world to return to where you are standing.  The Line is so confusing that there is a chance that you might indeed circumnavigate the globe before arriving at the finish! The aforementioned sign stands pretty much on the prime Meridian and it is the Meridian that the walking route roughly follows.

You will then see pieces by Richard Wilson and Anthony Gormley before taking the cable car to the Royal Docks. The next stage of the route is no less confusing but if you manage to stay on track you will see works by Sterling Ruby, Martin Creed and Eduardo Paolozzi. The third portion of the trail must be reached by taking the DLR from Royal Victoria to Star Lane. From here the trail is better signposted and takes you through an industrial area to Cody Dock, a great place to explore. You will see a Damian Hirst before moving along the River Lea to see an Abigail Fallis piece. Then the route gets confusing again as you have to take a bit of a looping detour to reach the Three Mills Complex, a set of Georgian tidal mills and the final stretch of the The Line which will take you past more sculpture and towards either Pudding Mill Lane station or Stratford High Street.

The Line is 4.6 miles long in addition to the rides on the cable car and the DLR, if you can find it all! I am always in favour of any attempt to bring art to the people and I love a good walk in London but if more people are to enjoy this particular route then the signage and that website must be attended to. It seems extremely curious in this day and age that such a poor effort is attached to what is actually rather a good idea.

Art has always been principally the preserve of the wealthy. Only a certain type of person would walk into a commercial art gallery or an auction to invest in a piece and these places might seem intimidating to the ordinary man in the street. These days the internet has started to change that. Galleries and even auction houses display works online and interested parties can purchase pieces or even make auction bids without the intimidating experience of entering the establishment. The work of artists who may have struggled to find a market for their pieces now has a shop window. Art galleries have moved into the technological age and avail themselves of retail software and ecommerce websites. It is just a pity that those who have organised The Line couldn’t manage something as basic as good signage let alone a website that functions.